Triumph Power Generating, an Independent Power Producer (IPP) located in Kenya, has signed a five-year-extension with a possibility of continuing further of its full operation and maintenance (O&M) contract with MAN PrimeServ, the after-sales brand of MAN Energy Solutions, for its 83 MW power plant in Kitengala, Kenya 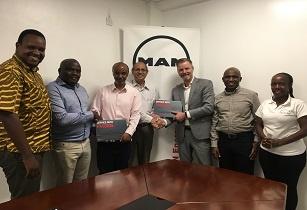 MAN PrimeServ has been operating the plant since it won the international tender in 2016. (Image source: MAN PrimeServ)

The plant consists of ten Himsen 18H32/40 engines and an additional steam turbine. MAN PrimeServ has been operating the plant since it won the international tender in 2016.

Henning Hansen, head of MAN PrimeServ O&M Execution, commented, “Taking over a power plant already in commercial operation, built and operated by unknown EPC and O&M contractors, was something we had never done before. But we were confident that we had the necessary skill set within our group to manage such a challenging project. The project posed many challenges to every part of our organisation, both for our permanent O&M staff at the power plant and also for our excellent technical back-up from our PrimeServ experts in Germany and Belgium.”

Additionally, MAN applied a turbocharger upgrade package and implemented the MAN control and protection concept to improve reliability, efficiency and output of the engines. The combined effect of the MAN upgrades made it possible to meet the customer’s requirements for output capacity and reliability.

K. Siva Shankar, general manager of Triumph Power Generating Company, stated, ”The communication with the MAN PrimeServ experts is very effective and the team’s broad expertise and experience in running power plants is adding a level of confidence to our operations.”