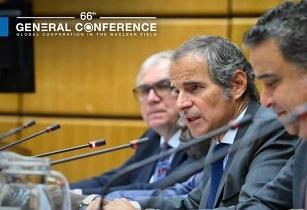 The International Atomic Energy Agency (IAEA) released a new publication regarding climate change and nuclear power during the 66th IAEA General Conference on 28 September, 2022. The event, ‘Supporting the Energy Transition in Africa’, showcased the 2022 edition of Climate Change and Nuclear Power, which provides a wealth of technical information and data about the benefits of nuclear power in contributing to achieving net zero greenhouse gas emissions by 2050.

IAEA director general, Rafael Mariano Grossi, said, “Everywhere I am hearing this global conversation about energy security, climate change and nuclear power, and whether by virtue of changes in circumstance, climate or security needs, it is quite clear that nuclear now has a place at the table.

“What I like about this discussion, is that there is no discussion without Africa. The Africans have said themselves we need to contribute, and we need our own specific analysis of how this nuclear jewel is going to be used for African economies.”

According to the new publication, approximately 600 million people in Africa have no reliable source of electricity, and increasingly, connection to a national grid is no guarantee of electricity supply. In sub-Saharan Africa, the World Bank reported almost 80% of businesses suffer from power outages. Meanwhile, Africa’s energy demand is increasing twice as fast as the global average due to urban population growth.

Against this backdrop, several countries are exploring the possibility of adding nuclear power to their energy output, with Egypt recently starting construction on its first nuclear power plant. South Africa, the only nuclear operator on the continent with two reactors totalling 2000MWe, is considering long-term operation of the Koeberg nuclear power station, and expanding its nuclear power programme.

Through its Milestone Approach, the IAEA supports around 30 ‘nuclear newcomer’ countries in Africa and around the world in their efforts to develop the necessary infrastructure for a safe and secure nuclear power programme.